map design tutorialsOctober 17, 2019alef007
On Sunday Poland held a national election. The right-wing Law and Justice Party (PiS) won a majority in the lower house of parliament (the Sejm), but lost its majority in the upper house (the Senate) to the opposition.

Before looking at the maps of this week’s election in Poland I want to show you a map of how modern day Poland looked in the Nineteenth Century: 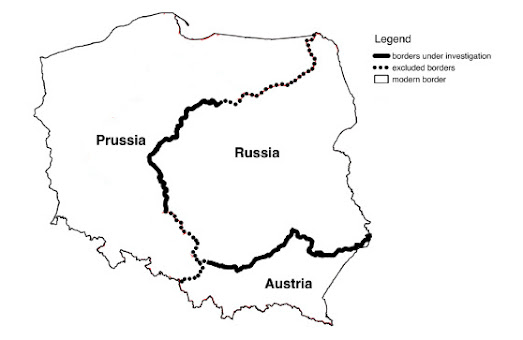 In August, 1772, Russia, Prussia, and Austria signed a treaty that partitioned Poland. Poland only regained its independence as the Second Polish Republic in 1918 after World War I. The borders that divided Poland during the Nineteenth Century disappeared over 100 years ago. Except on the country’s election maps.

Here are the results of this week’s elections for the winning Law and Justice Party (left) and the second placed Civic Coalition Party (right).

These choropleth maps show the levels of support for the two main parties in each electoral ward in Poland. However they also seem to show that Poland is still divided along the lines of the old Imperial borders. At least politically.

The ruling right-wing Law and Justice Party was clearly most popular in the areas of Poland which were part of Prussia and Austria during the Nineteenth Century partition of the country. The Civic Coalition Party won most of its votes in the area which was held by Prussia before the First World War.

This split in voting patterns along the lines of the old Imperial borders is nothing new. Back in 2013 Irena Grosfeld and Ekaterina Zhuravskaya wrote about how the spatial pattern in the 2007 election in Poland was “determined, to a large extent, by the Partitions of Poland (1772-1918)”. In The Past in the Polish Present the two professors argue that the very different economic and social policies which were followed by Russia, Prussia, and Austria in Poland for over a century have had a persistent legacy in Poland. This legacy appears to have been very apparent in this week’s Polish election.

Of course the economic and cultural effects of borders can be very long lasting. For example Germany still shows the effects of being split in two after World War II. Back in 2014 Zeit Online, in German Unification: A Nation Divided, explored how this split still ‘remains visible in statistics’. Twenty Five years after the fall of the Berlin Wall the paper published German maps of average income, the average age, the number of children in day care and in many other areas. In nearly all of these maps you can clearly see that there is a marked difference in the economic performance of the former East Germany to that of West Germany.