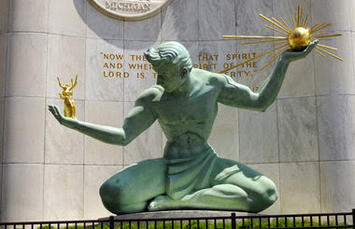 About a month ago, I came across a paper via Twitter in which the authors, Michael Hankinson of the City University of New York and Asya Magazinnik of MIT, studied the impact of at-large and district representation in local government on the “trade-off between the efficient production of collective goods and the equitable distribution of costs.” Specifically, they wanted to know if the California Voting Rights Act of 2001, which compelled more than 100 California cities to switch from at-large councils to district representation had an impact on the lack of development in multifamily housing. They cited three key findings: 1) district elections amplify the local interests of previously underrepresented groups, but also threaten the collective provision of goods with concentrated costs and diffuse benefits; 2) district representation causes a substantial decrease in the permitting of multifamily housing, the type of housing residents are most likely to oppose in their neighborhood; and 3) the district representation reform also causes the housing that is permitted to be more affordable and future development to be more equitably spread throughout the city.

Seeing that, I wondered if there was something to be learned from the experience of the largest city with the longest-lasting tenure of at-large City Council representation — Detroit? While I can’t determine the impact on Detroit’s housing production, I can say that the city’s at-large representation dramatically raised the political stakes — making what would’ve been neighborhood political battles into citywide ones.

(Now’s a good place for a parenthetic note. The content below is largely from a blog post I did five years ago on the factors behind Detroit’s decline. Those individual factors were part of a series I did, and you can find the entire series here: Origin Post, Part 1, Part 2, Part 3, Part 4, Part 5, Part 6, Part 7, Part 8, Part 9, Epilogue.)

These are indeed heady days for Detroit. The Big 3 are doing well (even if the city’s over-reliance on them hasn’t significantly changed), and the economy is doing better as a result. Downtown development has accelerated. Detroit is turning the corner, but Detroit is coming from a place no other city has been. This is just beginning.

Because of that, all is not rosy. Not long after Detroit exited bankruptcy and the seeds of its current revival were becoming more apparent, the Detroit Free Press published a story that highlights the skepticism that many residents feel, summed up in one quote from Detroit native, former GM worker and current cab driver Charles Richardson:

Here’s what I said earlier on this:

“In 1918, a new city charter was established that led to the reorganization of local government to have Council members elected city-wide, instead of by wards. This governance system has been in place ever since, but is slated to end with the establishment of a new charter in 2013 that will now elect council members from seven districts and two at-large spots.

This has been a double-edged sword for Detroit. While it may have kept a lid on some of the possible corruption that could have happened, it likely created greater distance between residents and city government. I believe this led to two significant impacts. First, it allowed the influence of the auto industry to travel unfettered within local government through the first two-thirds of the 20th century, without the countervailing influence of local residents. Second, without representation and support, neighborhoods were unable to mature in Detroit as they had in other major cities. They never had champions at the local government level, as elected officials had to view the city in its entirety and abstractly, and not represent and develop a unique part of the city.”

Political reform had long and deep roots in Detroit in the late 19th and early 20th century, and starts with Republican mayor and reformer Hazen Pingree.  Pingree was a four-term mayor who ran Detroit from 1889-1897 who came to office on a platform to wipe away the kind of ethnic-based, machine-oriented corruption that characterized many cities of the time. Being a businessman, he brought a businessman’s sensibility to the office and sought to root out inefficiencies, but he was sensitive to the conditions that ordinary Detroiters endured. So while business had a higher profile in local government, Pingree also instituted an expansive public works program that paved streets, and launched crusades against privately-owned services and utilities like streetcar systems, and gas, electric and telephone companies. Pingree left the mayor’s office to become governor of Michigan in 1897 and served one term, through 1901, choosing not to seek re-election. He died just six months after leaving office.

Pingree and the progressive community from which he emerged left an indelible mark on Detroit. Pingree and business leaders tilted early Detroit’s corrupt tendencies toward more efficient and accountable local government. By the mid-1910s, Progressive Movement reformers were pushing for a new city charter that would codify many of the changes they wanted. What did they want? At the time there were four primary policies that Progressives wanted:

In 1918, Detroit, with about one million residents, became the nation’s largest city to institute Progressive Movement reforms. This action effectively ended the kind of ethnic-driven machine politics in Detroit that would continue in other cities for another half-century.

At first glance this seems laudable. Elected leaders would have to consider all parts of the city when making decisions, and not become consumed with competing with other districts to dole out the best or most benefits. But in practice, different outcomes emerged. Elected leaders had the ability to look at the city more abstractly, but city residents did not live in an abstract city. Detroit, as did other cities in the middle of the 20th century, became a turbulent and tumultuous place for its residents, at the micro-local level. The city’s residents were in need of local advocates, not distant actors who would be unfamiliar with their conditions and concerns.

This is especially true because Progressive Movement reformers could not have anticipated the impact of the Great Migration that brought millions of black residents up from the South to work in Northern factories, nor the Northern response to their migration — restrictive covenants, redlining, blockbusting, among others — that rapidly transformed communities. For decades, there were white ethnic communities that sought protection. For decades, there were black communities that craved representation. Neither got what they wanted.

To understand this, let’s compare Detroit with Chicago and Cleveland, two nearby cities that had the same industrial and migration legacy as the Motor City. Chicago and Cleveland have maintained their ward or district electoral systems to this day. In both cities, one could argue that the discriminatory policies of the mid-20th century wounded the cities by creating sharp divides between white ethnic and black wards of each. In Chicago, that divide split the white ethnic north, northwest and southwest sides of the city apart from the largely black south and west sides. In Cleveland, the split was between the white ethnic west side and the largely black east side. Again, both cities were wounded by the policies of the time, but there was also a dual positive outcome — blacks gained local political representation early on in Chicago and Cleveland, and white ethnics were able to “hold on” in parts of the city for longer periods because they had local advocates within City Hall. This was not the case in Detroit. This becomes apparent when you consider the date when the first black City Council member in each city came to office. In Chicago Oscar de Priest was elected alderman in 1915. In Cleveland Thomas Fleming was elected to the City Council in 1916. Detroit’s first black City Council member was William Patrick, elected in 1958.

Because of the lack of local districts in the city, black Detroiters took a different route to elected leadership. Rather than pursue the impossible dream of citywide elections, those seeking office pursued seats in the Michigan Legislature and later, Congress. Charles Diggs, Sr. became the first black elected to the Michigan Senate in 1937. Black political leadership continued to grow at the state level in Michigan, until the numbers of black voters could support local victories, starting in the 1960s. Of course, that likely in part created the sense among the city’s white residents that they were now the ones who would not enjoy local representation, which factored into their future housing decisions.

This is as good a place as any to put this graph, which has popped up on this blog on occasion: 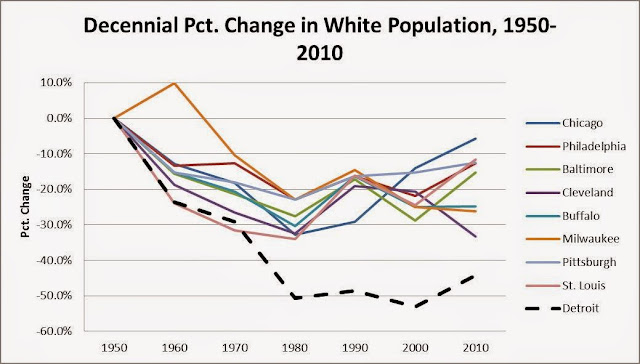 It’s also worth noting that Detroit is the only one on this list of Rust Belt peer cities that elected its City Council members on an at-large basis, at any time.

In early 2013, the city’s new charter went into effect allowing the election of council members in one of seven districts, as well as two at-large seats.  The district map looks like this: 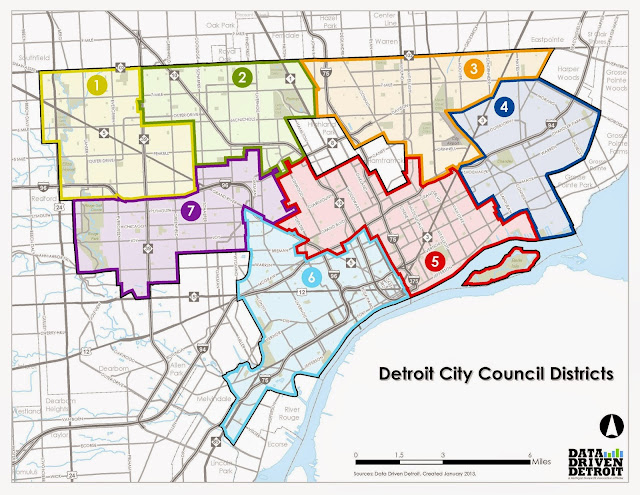 The first election held along district lines took place in November 2013.  There were previous officeholders who opted not to run under the new system, but many new potential leaders who saw this as a new opportunity. Raquel Castaneda-Lopez ran and won in District 6 on the city’s largely Latino southwest side, becoming the first Latina member of the City Council. It’s a little early to judge the performance of this iteration of the Council, but early returns suggests that there’s far less of the grandstanding and posturing that characterized the Council before the new charter went into effect. And it’s getting closer to representing the people it serves.

This piece first appeared at The Corner Side Yard